1.  Thursday, June 16, all day. If you’re interested in the social sector, understanding the innovations bubbling up in terms of creativity, collaboration and programming, then volunteering for the bigBANG! 2011 event is for YOU!  Please apply to be a Fellow and designate that you don’t mind volunteering.  Deadline is May 15.  Please be prepared to attend a May 24 orientation at Union Station at 1:30pm if you are able to volunteer June 16 for the event.

Volunteers get FREE admission and a super cool Free Lisa T-shirt.  Plus our undying love and affection.  Forever.

2.  June 3-14, varying days from 8am-noon. Want to get dirty?  Come on out to help harvest produce for bigBANG! 2011 at Paul Quinn College.  Email SarahJaneSemrad@gmail.com with your interest.  Details are in the works.  PQC is the school who plowed up their football field and turned it into an organic farm.  In Texas.  Please let us know if you’re interested.  Thanks!

Fellows to bigBANG! are emerging leaders, graduate students and entrepreneurs interested in social innovation, collaboration and mixing it up! In other words, perfect for Spark Club.  A limited number of these Fellow tickets are available. Please use this form if interested in applying for a Fellowship for the bigBANG! event on June 16, 2011 at Union Station. All the information about the event is on the conference website: www.bigBANGtx.org. 2011 Fellows will be announced on May 20. In the meantime, thank you for your interest!

THIS EVENT IS ABOUT TO SELL OUT.  PLEASE ORDER TICKETS NOW!

DALLAS, Texas (April 4) – Spark Club, a network of social entrepreneurs and artists collaborates with Pecha Kucha Dallas, an international phenomenon brought to Dallas for the sixth time on May 12, 2010 at 7pm at Sons of Hermann Hall.  The event is $5 and tickets can be bought online in advance at http://pkndallas6.eventbrite.com. Sons of Hermann Hall is located at 3414 Elm Street in Dallas.  RSVP on a dedicated site: pkndallas6.eventbrite.com.  Visit the official PKN Dallas site: http://pkndallas.org

ABOUT PECHA KUCHA DALLAS
PechaKucha Night was devised in Tokyo in February 2003 as an event for young designers to meet, network, and show their work in public. It has turned into a massive celebration, with events happening in hundreds of cities around the world, inspiring creatives worldwide. Drawing its name from the Japanese term for the sound of “chit chat”, it rests on a presentation format that is based on a simple idea: 20 images x 20 seconds. It’s a format that makes presentations concise, and keeps things moving at a rapid pace.  For more information, please visit http://www.pecha-kucha.org or http://www.pkndallas.org or twitter.com/pkndallas

ABOUT SPARK CLUB
Spark Club is an emerging network with the goal of sparking and nurturing good ideas for a deeper investment in our community. Spark Club is not your ordinary foundation, institute or not-for-profit. It is a completely voluntary network of brilliant people interested in affecting change where they live.   We recognize that social impact is achieved by working well with others and for a good cause.  Our gatherings, both virtual and actual are designed to identify and create new ways of looking at community challenges and social issues. We hope to inspire a robust network representing all sectors and issues areas to connect and leverage social entrepreneurship throughout the North Texas community.  Working in inclusive and interactive ways, we organize virtually and through a variety of actual gatherings that will take a variety of formats to meet, tease out, define, discover and develop innovative solutions to issues in our communities.  For more information, please visit SparkforGood.Wordpress.com

ABOUT THE CONFIRMED SPEAKERS
Andrew Sturm

Andrew is a part of the buildingcommunityWORKSHOP, a Dallas based design center that seeks to improve the livability and viability of communities through the practice of thoughtful design and building. His passion for design has always been closely linked to communities in need; whether they be an informal neighborhood in Nicaragua, or an aging, former industrial town in upstate New York. Andrew has taught and lectured on design and social equity, and in 2008, he had the honor of co-curating the American Pavilion at the Venice Biennale of Architecture, where he highlighted the work of artists, architects and creative instigators in the U.S. at the forefront of redefining practice.

Lacey is a 62 years old entrepreneur who once served two tours in Viet Nam and installed telephone cables.  It was during that time when he learned the pleasure found in making something without having the proper tools or materials and do the impossible with nothing under the worst of circumstances. Lacey is a self employed welder/fabricator, inventor, artist and has three utility patents issued by the United States Patent office.  Lacey is married with four kids and six grandkids.  Lacey is without a high school diploma or college degree, but as he says “I’ve taken a lot of courses!”

Sean is a licensed architect and the Sustainable Design Leader for the Dallas office of Perkins+Will.  For the past 12 years Sean has focused his career in the Higher Education market sector with a specialty in Science Planning and Laboratory Design.  Sean has furthered this laboratory expertise by completing the “Guidelines of Laboratory Design” certificate program at Harvard School of Public Health.  Sean’s passion for sustainability is rooted in his education at Montana State University where he received both his Bachelor and Master of Architecture degrees. Sean has just recently served a two year term as Chair of the Events & Education Committee for the US Green Building Council – North Texas Chapter and is still active on the committee today. Sean currently sits on the Board of the Dallas Architecture Forum, and is a member of the American Institute of Architects – Committee on the Environment.

Kael Alford is a documentary photographer, writer and journalist born in Middletown, NY, in 1971. She takes an immersive and long term approach to the subjects she reports including political conflict, underrepresented communities, cultural identity, and the human relationship to the natural environment. Kael began her career covering culture and conflict in the Balkans and the Middle East for European and American newspapers and magazines from 1996 – 2005. Her photography about the impact of the U.S. – led invasion of Iraq on Iraqi civilians is widely exhibited and included in the book: Unembedded: Four Independent Photojournalists on the War in Iraq (Chelsea Green 2005). She will return to Iraq this summer to follow up on that project. She is also documenting Native American communities on the coast of Louisiana facing dislocation due to massive coastal erosion and the environmental impacts of the oil and gas industries. That work will be exhibited at the High Museum in Atlanta in July, 2012. Alford takes photography assignments, lectures and writes about her work. She teaches at the annual Foundry Photo Workshop, and will be teaching photography at SMU in the fall. She holds a BA in Literature, an MA in Journalism from the University of Missouri and was a Nieman Fellow at Harvard University in 2008-2009.  Alford is represented by Panos Pictures in London and lives in Dallas, Texas.  For links to Kael’s work see: http://www.kaelalford.com and http://www.unembedded.com

Michael Siegel is founder and owner of Green House.  After graduating from law school, he acted upon his desire to create a new dining concept – healthy affordable.  Green House is a mobile restaurant that focuses on healthy, wholesome meals served from a converted mobile kitchen.  The menu focuses on lean proteins and local vegetables, as well as utilizing biodegradable utensils and containers.  Ben Hutchison is the Executive Chef and has over fifteen years of kitchen experience in Dallas, having been with Star Canyon, Routh Street, and most recently, Food Company.

Dustin Haisler is currently the Director of Government Innovation for Spigit, Inc.  Dustin is the former Assistant City Manager and Chief Information Officer (CIO) for the City of Manor, Texas. While at the City of Manor, Dustin and his team innovated a number of solutions to increase efficiency and cut cost. Dustin’s innovative uses of technology have received international attention and won numerous awards. In 2009, Dustin was named by Government Technology as one of the 25 Doers, Dreamers & Drivers of Technology in the nation. One of Dustin’s most notable projects was the deployment of a Quick Response Codes (QR-code) throughout the City of Manor. QR-codes are two-dimensional barcodes that can be decoded with most newer model camera phones. Residents and tourist that visit Manor can scan the QR-codes placed throughout town with their camera phones to receive real-time information on city projects, historic buildings and much more. In addition, Dustin helped launch Manor’s open innovation platform, called Manor Labs, in conjunction with the Persuasive Technology Lab at Stanford University. Dustin graduated Magna Cum Laude from LeTourneau University with a Bachelor’s of Business Administration.

Other bios are in the works.  For the most current information, please visit http://www.pkndallas.org

bigBANG! is working with Paul Quinn College to commission the growth of a good deal of the produce for the June 16 conference.  (Stay tuned for information about Fellowships etc to the conference.  It’ll be similar to last year.) Save the date for Friday, February 18 from 10-4 as Paul Quinn College’s FARM readies its field for winter planting.  Work along side students, faculty, staff and community members to prepare beds, rows and perform general maintenance of the field.  Contact Elizabeth Wattley – (214-379-5577 – ewattley@pqc.edu) or Andrea Bithell (214-379-5532 – abithell@pqc.edu) to pitch in.  Did we mention the farm is actually a re-purposed football field?  In Texas? 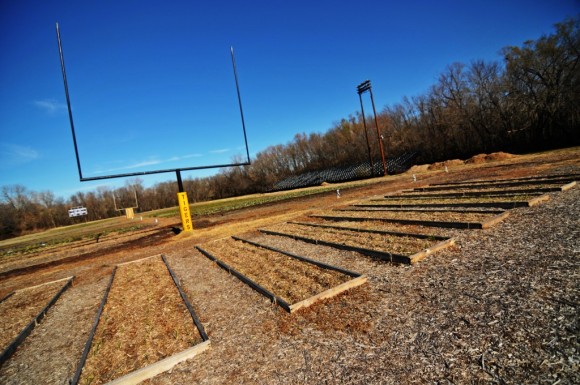 See it to believe it.  Dress for the weather and wear sturdy shoes and long pants.  See ya Friday in the field!  Pic by Can Turkyilmaz.

We are excited to have many requests for Spark Club 2011.  So, the co-conspirators are planning a Spark Club planning session in February and would like to have a few additional brains involved.  We are reaching out to our friends to see who might be interested in helping us plan our 2011 meetings and Spark fun!  So let us know (ntx.sparkclub@gmail.com) if you want to help and we will let you know the plans for the planning session 😉

Meanwhile, second reason we are writing, is we have an invitation for Spark Club folks to join a special event at the end of the month benefiting the Furniture Bank.  Spark Club has become known as a source of energized and talented social innovators!  And so, we have a generous benefactor who has provided tickets for us to attend the following event.  Please let us know if you would like to attend.  It is a great networking opportunity!  We will confirm once we hear from those interested.

Details can be found here: http://dallasfurniturebank.org/savethedate.htm

What is Spark Club?